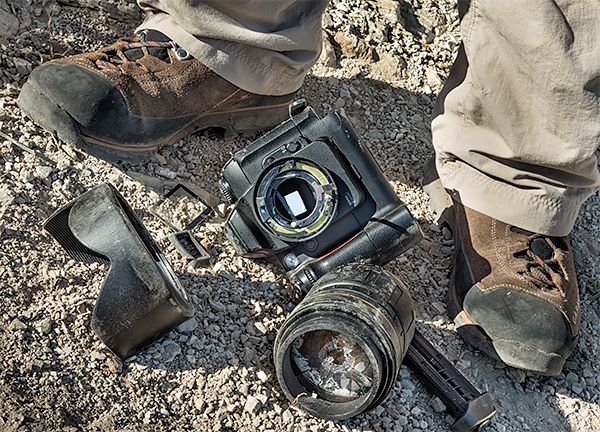 Why Does This Happen To Me?

Have you ever gone on a photography trip and had such a miserable time that you wanted to throw your camera gear out the window and give up? Have you ever felt like some great cosmic force was picking on you; that the Camera Gods were angry and chose you as the target to vent their rage? That you were insanely unlucky?

I’ve had some spectacular misadventures that occurred during my road trips. In 2015 my truck was broadsided by a deer (yes, a deer hit me) in Cedar Edge, Colorado and tore off my passenger side mirror, damaged the door and ripped off my antennae. On the coast of Oregon my Leaf Aptus digital back detached from my Mamiya 645AFD and bounced down an incline of basalt before coming to rest in a tidal pool. In the Sonoran desert of Arizona I packed up my gear late one night after a long day of shooting and inadvertently forgot to load my Gitzo 5561 tripod back into my truck before driving away, and after discovering it was missing, drove 90 miles back to the location to find someone had already found and took it.

Weather rarely cooperates, whether it means empty blue skies when clouds were forecasted or a blizzard when mild temperatures were forecasted. In 2012 I went to Crater Lake, Oregon in April. The weather forecast called for blue skies and daytime temperatures in the low 60’s. It sounded great, but I arrived at Crater Lake in the middle of a blizzard and the temperatures were in the low 30’s. I was dressed in a T-shirt, shorts and sandals, which I had put on that morning after camping in Northern California. In 2013 I drove to Big Bend, Texas in April and the weather forecast said it would be 108 every day of the week. It was warm the first night I arrived, but I woke up early the next morning to howling winds and a temperature of 42 degrees. The temperature never rose above 50 that day, and it took a week for the temperatures to climb back into the 90’s. The strong winds stuck around for the entire trip.

Then there was the time a few years ago when I was parked out in the middle of nowhere and sleeping in the back of my truck near Canyon de Chelly. An intoxicated man somehow discovered me around 2 am, miles from any town and in the pitch dark on a moonless night, opened the rear window on my truck’s shell and leaned in to wake me up because he wanted a ride back to his house. I won’t go into detail about what happened next, but to paraphrase a quote form the movie A Christmas Story, I wove a tapestry of obscenities that as far as I know is still hanging in space over the Four Corners area of the United States.

Chain a few experiences like these together and it’s easy to become frustrated and frankly, to feel a bit targeted by some kind of higher power. But it’s important to remember that everyone, even the greatest photographers throughout history, has to deal with the same types of tribulations, and sometimes worse.

Several years ago, after returning home from a particularly miserable and taxing trip through the southwest, I was fuming about my misfortune when I picked up a photography book and started browsing. In a chapter that I randomly turned to, there was an excerpt from a letter that Ansel Adams had written to a friend recalling an incident he had while photographing with some friends in Canyon de Chelly in Arizona in the 1940’s. He wrote in detail about how their vehicle got stuck in a sandy wash in one of the canyons, and while they were trying to free the car, it started to rain. Fearing that their negatives would be ruined, they got back into the car to cover their film and gear. Being unable to extricate the car from what was now thick mud, the three of them had to spend a miserable night huddled in the damp car and hoping they wouldn’t be caught in a flash flood.

That story was relieving to me not in a schadenfreude way (okay, maybe just a little), but in the realization that even somebody like Ansel Adams could have a lousy day in the field. That one letter was likely one of many written to friends in an effort to vent steam over excursions gone awry for one reason or another. If it could happen to him, then there was no reason to take it personally when it happens to me. But Adams wasn’t the only high profile photographer who had a horror story to tell.

In 1870, William Henry Jackson was photographing in Yellowstone as part of an expedition to document the area. A photographer named Joshua Crissman accompanied Jackson as a guest. While photographing the Grand Canyon of the Yellowstone, Crissman’s camera was blown over the cliff into the canyon and utterly destroyed. (Jackson graciously loaned Crissman his 6-1/2” x 8-1/2” for the duration of the trip.)

As a side note, a contemporary of Jackson had also photographed Yellowstone on an earlier expedition of that same year; T.J. Hine from Chicago. Each photographer wanted to be the first to get his images into the market. We’ll never know what exactly Hine brought back with him, for he returned to Chicago in time to have all of his plates destroyed in the great fire of 1871. Talk about miserable timing.

I once read about how Art Wolfe, after being on the road for over a month, stopped at a restaurant for a warm dinner and afterwards returned to his van to find it had been broken into. All of his gear—and more importantly—hundreds of rolls of exposed film, had been stolen. (This story has haunted me ever since I read it and any time I stop somewhere for food my rule is that I must be able to see my truck from wherever I’m sitting.)

No matter who you are, bad things can and probably will happen. The fact is, the more time you spend practicing this craft the more your chances of misfortune increase. Read any of Joe McNally’s books. He regales his readers with some of the most extraordinary examples of disaster that you’ll ever hear. The moral of the story is that he’s still here and still shooting. He’s survived it all and so will you and I. If we’re lucky, we’ll all have some good stories to tell one day.