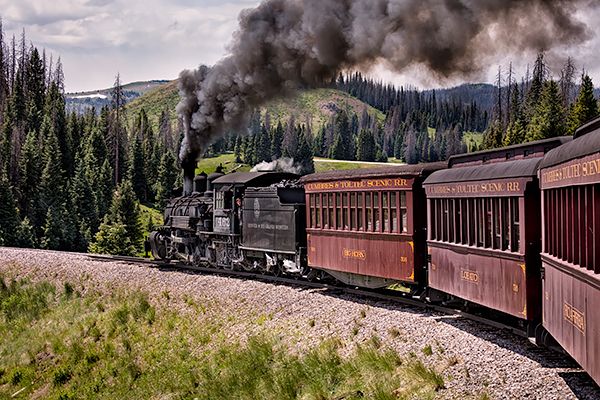 Riding the Rails in the San Juan Mountains

I have a deep-rooted interest in history, and it’s reflected in the subject matter that I enjoy photographing. Ghost towns, mining towns from the 1800’s, Native American ruins, Spanish Missions from the colonial days, Native American rock art and American Civil War reenactments are some of the things that attract me and capture my imagination. So it’s no surprise that when I had an opportunity to ride on an old-fashioned steam train over the Fourth of July holiday weekend, I jumped at the chance.

My wife and I met with other family members in Chama, New Mexico, home of the Cumbres & Toltec Narrow Gauge Railroad. The section of rail we would be traveling on was originally constructed in 1880 as part of the Rio Grande Railroad’s San Juan Extension, which was designed to serve the mining district of the San Juan Mountains in southwestern Colorado. Rather than boarding the train in Chama and riding to it’s terminus in Antonito, Colorado, we took a bus to Antonito and rode the train back into New Mexico. It had been suggested to us that that north to south was the best direction to travel since Antonito is in a desert environment, and it can be a bit anticlimactic after traveling through the mountains and forests nearer to Chama.

It was a slow, winding and bumpy ride as we made our way through the mountains, passing through tunnels and over trestles. I had to wash the soot out of my hair and off my camera gear at the end of the day, but the scenery was fantastic and the experience was amazing. If you ever have the opportunity to ride an old steam train, do not pass it up. It’s fun and gives a unique glimpse into everyday life from over 100 years ago. Just be sure not to forget your camera!