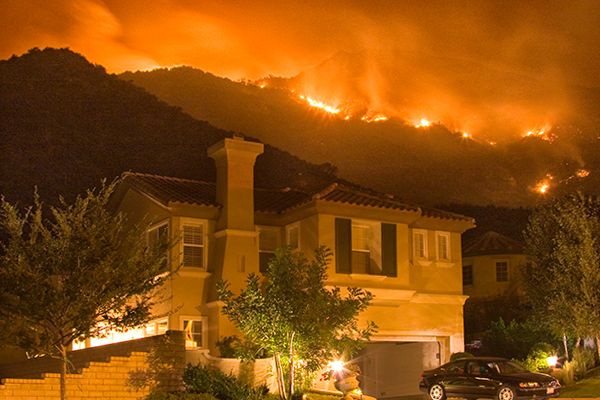 I woke up this morning to discover there were multiple wildfires burning in southern California. While the nearest fire is over 20 miles from where we live, the fires virtually surround us to the east, north and west. The air is filled with smoke and it feels very apocalyptic. Although this is sadly a fairly common occurrence when the Santa Ana winds arrive after no rain has fallen in October or November, it’s a good opportunity to review a few things that serious photographers should keep in mind when dealing with natural or man-made disasters. I’m only going to address photography-related issues, since if you live in earthquake, fire, hurricane or tornado country you should already have evacuation plans, food, water, batteries and other emergency supplies in place.

The first thing that I highly recommend doing is insuring your gear. If you’re a professional working photographer, you probably have a fair amount of gear ranging from multiple camera bodies in multiple formats, lenses, tripods, strobes and speedlites, light modifiers, light stands, storage cases, etc. If you’ve been shooting and acquiring gear over many years, you may not even realize how much you’ve stockpiled. Don’t forget filters and grip gear, which can add up to several hundred if not thousands of dollars by themselves.

While you may be willing to eat the expense of a single lens or camera body that you accidentally drop on location, imagine the impact of losing all your gear at once. Whether it’s stolen, burned in a fire or destroyed in a flood or tornado, the loss would be devastating if you aren’t insured. I insure all of my gear except for smaller pieces of grip gear, memory cards, cable releases, etc. Insuring every single piece can be unwieldy and expensive, and I’m aware that if I were to lose everything all those little pieces of incidental gear would quickly add up to a fair sum of money. You have to weigh your risks and decide what you want to keep your premiums at versus how much you’re willing to gamble having to replace out of your own pocket should disaster strike.

The next thing to consider are the photos themselves. The amount of film I shoot is negligible and easy to contain in one storage box. My digital files, however, span several hard drives. When it comes to digital files the old saying goes, “You don’t have one copy if you don’t have two.” If you only have one copy of a file and it becomes corrupted, then it’s gone forever. The same applies if you have one copy of all your files on one hard drive, and the entire drive fails or is destroyed. I make duplicate copies of entire drives, keeping one spare copy in my personal storage and sending another copy off-site. Having multiple copies becomes worthless if they’re all in a house that burns or is wiped out by flood or some other disaster. Keeping a set of files in another geographic location is a good idea, along with use a cloud-based service.

I like contingency and fail-safe planes to have multiple levels. If plan A fails, then plans B & C are the safety nets. I’ve read horror stories about well-known photographers who suffered catastrophic loss of gear, film or digital assets. While it’s good to learn from your own mistakes, it’s even better to learn from someone else’s. Take some time to think ahead about what could happen to your gear, film negatives or digital files, and create a plan that gives you the best possible chance of preventing disaster if possible, or recovering from it if necessary.