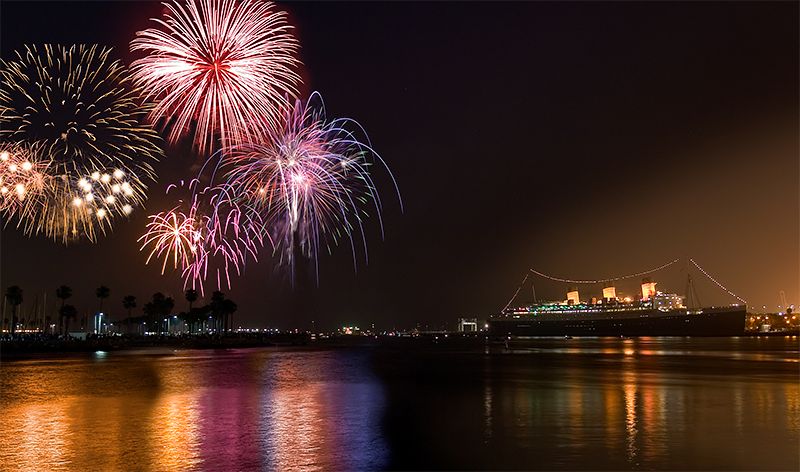 Independence Day is just around the corner here in the US, so I thought I’d use this week’s blog to suggest some tips for those who want to photograph fireworks displays. It’s easy to do and doesn’t require a lot of expensive gear, so why not give it a try?

I use a Canon 5D MK III or Canon 5Ds R for my shots, depending on how large a file I want, but any DSLR will work providing it allows for manual setting of exposure time. I attach a cable release to my camera and mount it on a solid tripod. (I use a Gitzo 5563 but you don’t need anything that elaborate; just a stable mount for the camera.) I then set the camera exposure to the Bulb setting. This allows me to lock the shutter open for however long I want; capturing multiple fireworks bursts in a single frame. The longer the exposure time, the more bursts you will capture and the longer the “trails” of the bursts will be. Note however, that the more bursts you record, the more exposure you’re allowing and you could accidentally overexpose your image.

Since I generally use wide angle focal lengths in the 16mm - 24mm range for fireworks, there is a lot of depth-of-field built in so a small aperture is not necessary. I usually use f/8 or f/11, depending on how frequent the bursts are. If the fireworks are being shot off at a fast pace, f/11 may work better to keep multiple bursts from overexposing the image.

I like to arrive at the location early and find out exactly where the fireworks will be detonating, since that allows me an opportunity to find an interesting foreground or some kind of framing element for the fireworks. It also gives me an idea of where to focus my lens. If you’re not able to find out a specific location, you can manually focus your lens at infinity. Make sure you turn off auto-focus or your camera will start hunting for focus as soon as you hit the cable release to expose an image. (If you don’t have a cable release, you can use the two second self timer option. It makes it a bit more difficult to time the bursts, but you’ll have time to find the rhythm and timing of the fireworks to get some good shots.)

I use low ISO settings such as 100 or 200 for fireworks because the relatively wide aperture can accommodate the lower ISO, which in the end will help create a file with less noise in it. But since longer exposure times heat up the sensor and can result in added noise, you can also turn on any noise reduction features your camera may have. As with everything in photography, it's a balancing act. You will have to keep in mind that in most cases the camera will be occupied after every exposure for the same length of time that the exposure was set in order to apply the noise reduction. So for example, a two-second exposure will take an additional two-seconds after the shutter closes for the noise reduction to be applied for a total of four seconds before you can make another exposure.

On occasion I have used a black card—usually black foam core or a thin sheet of black craft foam found at Michaels or any craft store—to cover the lens between bursts of fireworks. Once it’s dark out and the fireworks are going, placing the card in front of the lens (without resting it on the lens and causing vibration in the camera) will block ambient light from reaching the sensor, and then I can remove the card to record however many bursts I want. Some people do this as a way to avoid the vibration of the mirror moving out of the way of the sensor at the beginning of the exposure, but I tend to use mirror lock-up to avoid this issue. The card works for me as a way to expose multiple bursts while covering the lens between each burst to keep out any ambient light.

The great thing about fireworks displays is that they last quite a long time, so you have time to “dial-in” your settings. You can adjust your aperture or the length of time that you are holding the shutter open and still have plenty of opportunities to get some great shots.

One last word of caution: you’ll want to decrease your exposure time length once the Grand Finale starts, or you’ll blow your frame out to white! The fireworks will be going off fast and furious, and it’s easy to overexpose. Use shorter exposure times or stop down the lens to smaller aperture to keep things under control.

I hope everyone has a safe and enjoyable holiday. The blog will be on hiatus next week due to a commercial project shoot, but will resume the following week. Happy Independence Day!