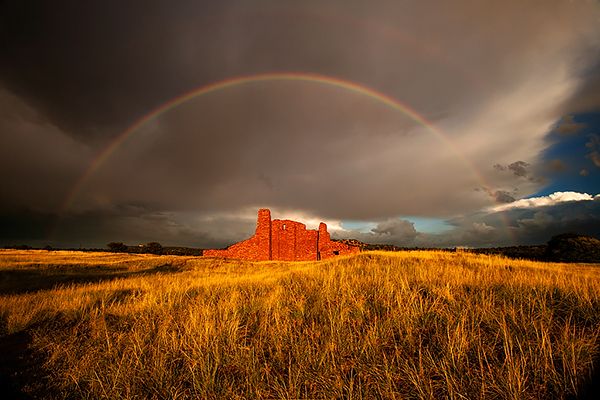 Make Your Own Luck

There have been many times when I’ve looked through books by Ansel Adams, Philip Hyde, David Muench, Guy Tal and others, and after viewing one amazing image after another thought to myself, “How does one person get so lucky when it comes to finding such great light or such a magnificent scene?” It seems unfair, like maybe things could be distributed a little more evenly among more photographers. Like me.

I spend months on the road every year, and more often than not I’m skunked by the weather or something else that results in less than optimal conditions. But then there are also times when I, as Ansel Adams once said, “get to places just when God’s ready to have someone click the shutter.”

When it comes to locations, I have only so much control over what I get. I can try to be in Colorado and Wyoming when the leaves are at their peak color in the autumn, in the desert after a rainy winter when the wildflowers appear, or in the mountain basins when the wildflowers bloom in the summer. Even though it happens at roughly the same time of year, it’s difficult nailing the timing down. And when it comes to weather, the forecasts are wrong far more often than not, and in the mountains weather can change drastically within minutes. So how did Adams manage to capture so many amazing moments? Why was he so “lucky”?

The reality is that “luck” is really random chance, and random chance can be manipulated to an extent using two components: time and knowledge. Adams used both of these to his advantage. He used his time well. He was always out with his camera. Few photographers have captured Yosemite the way Adams did, yet Carleton Watkins and Eadweard Muybridge photographed Yosemite multiple times nearly fifty years before a 14-year-old Ansel Adams would set foot in the park for his first time in 1916. We remember Adams’ work best because he had so many amazing images. And he had so many amazing images because he photographed the park over the course of about 60 years, and lived within Yosemite Valley for 20 years. He was always there to see whatever was happening, and he usually had his camera with him. Watkins and Muybridge, on the other hand, were photographing Yosemite using wet plate collodion on glass plates and having their equipment hauled around the valley on the backs of mules before there were any roads in the park. They had limited time and limited exposures.

Adams also increased his odds with knowledge. He was a master of all aspects of photography from exposing the film in the camera to manipulating it in a dark room. A quote that Adams himself used was Pasteur’s “Chance favors the prepared mind”. There is no better example of how mastering one’s craft can lead to success where others fail than Adam’s story of how he made his photograph, Moonrise, Herndandez, New Mexico. In his book The Negative, Adams writes of the experience:

“I came across this extraordinary scene when returning to Santa Fe from an excursion to the Chama Valley. The sun was edging a fast-moving bank of clouds in the west. I set up the 8 x 10 camera as fast as I could while visualizing the image. I had to exchange the front and back elements of my Cooke lens, attaching the 23-inch element in front, with a glass G filter (#15) behind the shutter. I focused and composed the image rapidly at full aperture, but I knew that because of the focus-shift of the single lens component, I had to advance the focus about 3/32 inch when I used f/32. These mechanical processes and the visualization were intuitively accomplished. Then, to my dismay, I could not find my exposure meter! I remembered that the luminance of the moon at that position was about 250 c/ft2,; placing this luminance on Zone VII, I could calculate that 60 c/ft2 would fall on Zone V. With a film of ASA 64, the exposure would be 1/60 second at f/8. Allowing a 3x exposure factor for the filter, the basic exposure was 1/20 at f/8 or about one second at f/32, the exposure given.

I had no idea what the foreground values were, but knowing they were quite low, I indicated water-bath development. The distant clouds were at least twice as luminous as the moon itself. The foreground density of the developed negative was about a Value II, and was locally strengthened by intensification in the Kodak IN-5 formula. It was of utmost importance to preserve texture in the moon itself. We have all seen the blank white circle that represents the moon in many photographs, primarily caused by gross overexposure.”

A quick note for the above text; Adams derived the length of exposure and aperture based off of his ASA film speed of 64. The exposure time is essentially the reciprocal of the film speed, and the “key stop” is the square of the film speed. He then adjusted for the aperture he wanted to use.

Imagine having this kind of knowledge at your command. Most photographers using a film camera with no light meter under those conditions would likely have botched the shot. Seeing Adam’s print, they would then declare that he had gotten “lucky”. But now we know luck has little to do with it.

If you shoot on occasional weekends your odds of capturing those amazing moments in nature are negligible. But if you shoot constantly, your odds increase simply because you’re more likely to be in the right place at the right time. More opportunities equal more chances for success. If you know your equipment inside and out, you will not be bumbling with settings when the decisive moment arrives. You will get out of photography whatever you’re willing to put into it. As Seneca wrote, “Luck is what happens when preparation meets opportunity.”