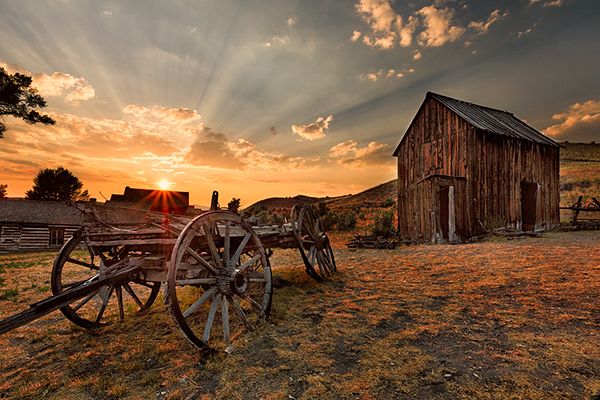 Have Your Own Vision

Over the past twelve years I’ve had a lot of interesting experiences while photographing around the American West. I’ve met a lot of nice people and have seen many beautiful places. There is one situation though that has always agitated me to some degree, and recently it has been occurring at an increasing rate. I would like to share it because I’m certain there are other photographers out there who have experienced the same thing.

Sometimes when I’m at a location, after spending time scouting the site and putting careful consideration into how I want to frame the scene based on the light and the story I want to tell, I will set up my tripod and camera and in an instant I’ll be surrounded by a small crowd of people trying to shoot over my shoulder. Where did they come from, and why are they huddled around me?

In the Ansel Adams biography Looking At Ansel Adams: The Photographs and the Man written by Andrea G. Stillman, there is a passage about how when Ansel would set up his camera, nearby photographers would clamor around him and set up their own tripods, trying to capture whatever scene the master had envisioned. I can understand the allure of sidling up to a photographer like Adams, Art Wolfe, Jack Dykinga, Jim Richardson or many other well known landscape photographers and “borrowing” a frame from them. But I’m not Adams, or Wolfe, or anybody that anyone would recognize or know about. The only explanation that I have is that they see the tripod, the “pro” camera and assume I must know what I’m doing. (That’s a mistake. I’m the guy who should have the bumper sticker on my truck that reads, “Don’t Follow Me: I’m Lost.”)

The frequency has increased exponentially since camera phones evolved to the extent they can produce quality images, but people with cameras of all kinds seem susceptible to the gravity of a pro-looking rig. My first experience with “picking up a shadow”, as I refer to it, was when I was just beginning photography. I was photographing at the Poppy Preserve in Antelope Valley, California. I would walk around the flowers, find something I liked, set up my tripod and shoot. After a while I noticed a woman standing nearby. I assumed she wanted to get a shot and maybe I was in the way. After I finished and left, she kneeled and photographed the area I was shooting. I didn’t think anything about it, until I noticed her behind me again a few minutes later. Again, after I left, she photographed the same group of flowers. This continued for maybe 30 minutes, by which time I was becoming frustrated and a little creeped out, so I got into my car and drove to another section of the preserve.

A couple of years ago I was photographing sunrise at Crater Lake. It was still early in the season and a cold morning, and when I arrived at the location I wanted to photograph there were four other people there, grouped together. I set up about 30 yards away. A few minutes later, one of the photographers from the group approached me and asked if I minded if he set up next to me. When I told him I didn't mind, he proceeded to set up so close to me that the legs of his tripod intersected mine, and the baseplates of the tripods nearly touched one another. I was dumbfounded by the absurdity of the situation. Here we were in the wilderness with literally miles of empty space around us, and he was convinced that he needed to occupy the same physical space I did.

One autumn while at the ghost town of Independence, Colorado I had framed a shot on my tripod, then turned to retrieve a filter from my camera bag. When I turned back to the camera, I found another photographer standing in front of my camera, peering down the lens, then he turned and couched to put his own camera on the same axis as my lens, and took his shot. (or rather, mine.) I couldn’t hold back any more. “Are you kidding me?” I asked.

Photography is a lot more than simply understanding f-stops, ISO and shutter speeds. It’s more than focal lengths, depth-of-field and the inverse square law. It’s about having a vision and researching your subject. I spend a lot of time reading books and researching locations online so I can form an idea of how I want to photograph it while simultaneously seeing how it’s already been photographed. I can’t fathom showing up without having a notion of what I wanted to get or how I wanted to render the scene. It doesn’t make sense to me.

The bigger issue is the vision. What is the point of leeching a photo from me when you don’t even know what story I’m trying to tell? What satisfaction can possibly be derived from taking a photograph that you didn’t frame, made from a scene to which you were oblivious? More importantly, how can you possibly hope to learn how to photograph when you’re simply copying what someone else is doing without even knowing why they’re doing it?

Regardless of what type of subjects you like to photograph; landscapes, architecture, portraits, street photography or whatever, it’s important to approach the subject with a strong idea of how you want to portray it. Ansel Adams once said, “There’s nothing worse than a sharp image of a fuzzy concept.” Know the story you want to tell, the mood you want to convey and how you hope to connect with the viewer. It’s okay to make bad photographs. It’s how you learn. It’s far, far better to approach photography with your own concepts and vision and fail a few times (or many times) than to imitate what someone else is doing and possibly find some quick success. Photography is an intensely personal thing. Make it, and your photographs, your own.