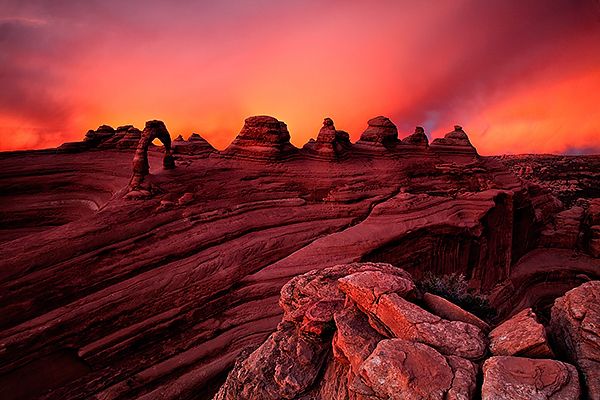 Last week I returned from a month-long road trip. I’ve been on the road a lot lately. In fact, I’ve put over 18,000 miles on my truck since July 1st of this year. I’ve been doing a lot of driving, a lot of hiking (well over 100 miles) and a lot of photography. What I haven’t been doing is a lot of writing. I carry my laptop with me, ostensibly to write blog posts in my spare time, but after a day of lugging all my camera gear through 14 miles of Utah canyons, when I get back to my truck I feel less like writing and more like passing out. String together days, then weeks, of that kind of activity and you end up with a lot of blank pages in your blog.

The situation lead me to think about the times I’ve felt the same way about taking the camera out to make some photographs. There have been days during my photography trips when it’s raining, or very windy, or snowing, or blazing hot or freezing cold. This past summer and fall I was caught in many hail storms in Colorado and South Dakota, and was temporarily trapped by a flash flood in a mountain basin in the San Juan Mountains of Colorado. There are many days when my muscles are sore and feet ripped up from the previous day’s marathon hike. Days when I’m tired because I’ve strung together several consecutive nights with four hours or less of sleep. Days when the light is too harsh or too bland for the photos I wanted to make. Days when I feel completely burned out or unenthused.

If I were only making photos for myself or as a hobby, skipping a day now and then and vegetating wouldn’t make much of a difference. But because I try to earn a living from my photographs, and constantly need new material to submit to publications that are always hungry for fresh content, leaving my camera sitting in its bag doesn’t help my situation. Whether it’s making photographs or writing content for a blog, if I take my work seriously I need to approach it as a professional and get the job done regardless of how I feel.

The photo I included with this post is a good example of the rewards that can be reaped by breaking the inertia and not giving in to being lazy. I was in Arches National Park several years ago. The sky was overcast all day and it was breezy and chilly with scattered showers. I hiked up to Delicate Arch and found only a relative handful of people waiting for sunset. Usually the area is crowded to capacity because it is considered “the” place to be for sunset. But because of the lousy weather, few people felt like burning the calories required to make the fairly strenuous hike to the arch.

Suspecting that I wasn’t going to come away with anything spectacular, I decided to use the opportunity to walk around and scout new locations for another time. As I did, the small band of people who were there began to dissipate and make their way back to the trailhead until only one other person was up there with me. He was a tourist and not a photographer, as he only had a small point and shoot camera with him, but he seemed to be enjoying the relative solitude.

After walking around the arch for an hour or so, I found a position I liked and noticed that on the horizon there was a thin strip of empty sky, barely large enough to accommodate the disk of the setting sun. I thought that if it remained cloudless, there could possibly be some decent light for a few minutes at least. As it turned out, the little patch of empty sky held and, as the sun set, focused the light through a very narrow window of clear sky. It lit the clouds up spectacularly, and the vivid colors remained for a few minutes after the sun passed below the horizon. I saw my companion on the other side of the arch, photographing with his camera and having a wonderful time. It was one of the most brilliant, colorful sunsets I’ve ever witnessed, and I would have missed it completely if I had given in to the urge to call it an early day, as so many other people had.

Granted, there have been many time I’ve exerted the effort and sat out in the rain or other lousy weather hoping for that little break in the clouds only to be skunked. I’m disappointed far more often than I’m rewarded. But the only way to get that occasional pay off is to be out there all the time so I can catch it when it happens.

Take heart in knowing that you’re not alone when you find you would rather sit on the couch and watch TV than pick up the camera bag and head outdoors. But if you want to excel at your craft, you have to constantly practice it. If you want the great shots, you have to constantly put yourself in a position to find them. Ultimately, if you find yourself making more excuses than photographs, remember that there will always be someone else who has more drive, motivation and dedication who will happily take the shots that you’ve left behind.