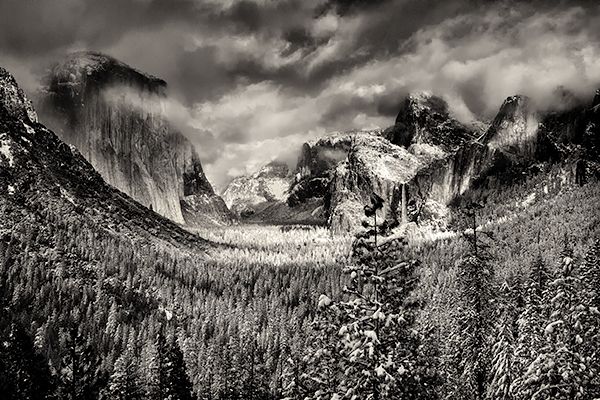 Be the Next Ansel Adams!

There is a particular magazine that I subscribe to that caters to nature and outdoor photography. I have been reading it for well over a decade and love it, and God bless them, they’ve featured my work multiple times over the years. Still, I have a private running joke about how many times in one calendar year that a photo of Yosemite will appear on the cover. And, at least once a year, there will be an article titled something along the lines of, Be the Next Ansel Adams! or Shoot Like Ansel Adams!

I love Ansel Adams, but I’m not delusional enough to think that I’m ever going to shoot like him. No magazine article is going to hold the magic key for me. Years ago I educated myself in photography by reading Ansel’s books. I can guarantee that over the course of his lifetime, he forgot more about photography than I’ll ever learn. But these types of articles got me to thinking about something a little deeper; about hero-worship and personal style.

In the summer of 2004 I was driving through the desert in Nevada on Highway 95, heading to the old mining town of Goldfield. I was a newbie with a camera, and was out shooting one of my favorite subjects; ghost towns. I was listening to the radio to help pass the time driving through endless miles of brown, sandy landscape. There was a story about Ray Charles, who had just passed away, on NPR. During the course of the story, the radio host related a story about a conversation Ray had with a friend during the early days of Ray’s career. One day his friend approached him and exclaimed, “Ray, you’re going to be huge! You sound just like Nat King Cole!” To which Ray Charles replied, “I don’t want to sound like Nat King Cole. I want to sound like Ray Charles.”

Ray’s comment stuck with me. What a brilliant statement that cuts to the essence of what eludes so many artists! It was no insult to be compared to Nat King Cole, but Ray didn’t want to sound like someone else, no matter how legendary they were. He wanted his own, unique sound. When people heard his songs, he wanted them to know it was Ray Charles.

This is what I think about when I see articles like those mentioned above, or hear photographers who say that they want to shoot like Adams or any famous and innovative photographer who has come before. It’s natural for us to want to emulate the style of our heroes. But there already was an Ansel Adams, and he was better at being Ansel Adams than I’ll ever be. For better or for worse, I want my work to look like mine. To develop a style that people will either appreciate or not, but it will be who I am and not a facsimile of someone else. I think it’s a worthy concept that every photographer, and every artist, should keep in mind.